The Story of Easter… Told By The Women Who Were There.

Each year on Holy Saturday, Brigid’s Place invites you to Easter in Memory of Her, an innovative service of music and mediation that celebrates the voices of the women who loved Jesus — Mary the Mother, the woman at the well, the woman who anointed Jesus, Mary of Bethany, and Mary Magdalene.

The service imagines the thoughts and prayers of the women surrounding Jesus and blends them with the music performed by singers from the Houston Chamber Choir and words written by Rice University professor April DeConick and Cathedral Canon Betty Adam.

Following last year’s service, DeConick commented, “The performance of Easter in Memory of Her at Christ Church Cathedral was stunningly beautiful. I don’t think there was a dry eye in the congregation including my own. The women soloists were outstanding yet again. Every time I see this performance I am taken to the cross. It has become my Easter.”

Adam shared, “Easter in Memory of Her continues to be a powerful experience for me — to confront the cross together with these beloved women, whose grief pours forth as well as their unwavering devotion. It helps me gain a deeper understanding of my own spiritual journey. I am so glad we can bring a presentation of such depth and beauty to the Houston area.”

Easter in Memory of Her

Isabelle Ganz (Woman at the Well)

The women remained steadfast and faithful

It is almost Easter, when 70 percent of Americans commemorate the death of Jesus and celebrate his resurrection. Most of the traditional Easter stories and pageants celebrated in churches remember the male disciples and their supporting roles, from the all-male Last Supper to Judas’ betrayal to Peter’s denial to the thieves’ redemption. But women played a role in Jesus’ life and the events surrounding his death and resurrection too. So why aren’t we including them in our Easter celebrations?

For years, as a biblical scholar, I have been devoted to trying to understand marginalized, forbidden and forgotten people like the women in the biblical story whose stories have been sidelined. Women’s stories have taken second place to the interests and needs of male biblical writers and male leaders in Christian churches over the centuries.

The stories of the biblical women recorded in the ancient sources take the back seat to the stories of the men because the texts were written by male leaders in emerging churches who had their own interests to front and authority to assert and maintain. The women’s stories have to be reconstructed and reimagined carefully from what the ancient sources tell us and from what they don’t. 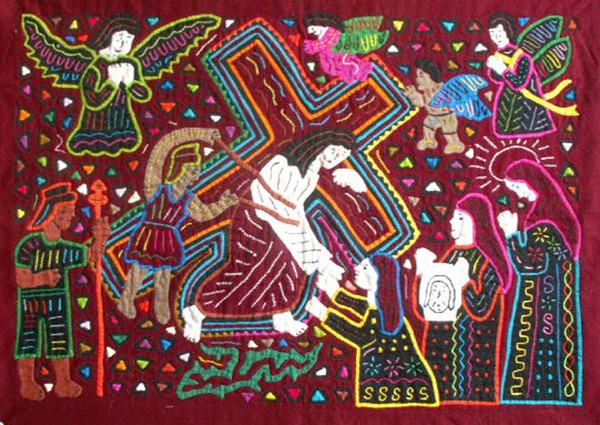 The Gospels agree that at the most difficult moment in the Christian story, when Jesus hung on the cross exposed and suffering, a throng of his women followers remained with him at Golgotha and watched him die. Then they helped Joseph of Arimathea take down his body and lay it in the tomb before dusk fell.

If we are to believe the author of the Gospel of Mark, his male followers deserted him. And we know from multiple sources that Peter betrayed ever knowing him. But the women remained steadfast and faithful.

Can we reimagine who these women were and what they must have been feeling as they stood and watched Jesus nailed to the cross and then hung to die as a common criminal, the plaque above his head declaring his crime of sedition? How frightened and horrified they must have been.

Who would have been there? I imagine Mary of Bethany standing there looking up at Jesus and remembering her brother Lazarus, how Jesus had consoled her when Lazarus had died, even crying with her. Was she also remembering sitting at Jesus’ feet as his student, rather than serving him dinner as women were supposed to do back then? Was she thinking about his teachings, that God is love, that the poor are blessed, that we should be peacemakers, feeding the hungry, clothing the naked, taking care of the sick, welcoming the stranger, helping the outlaws? Had she come to realize how difficult and dangerous his message was? 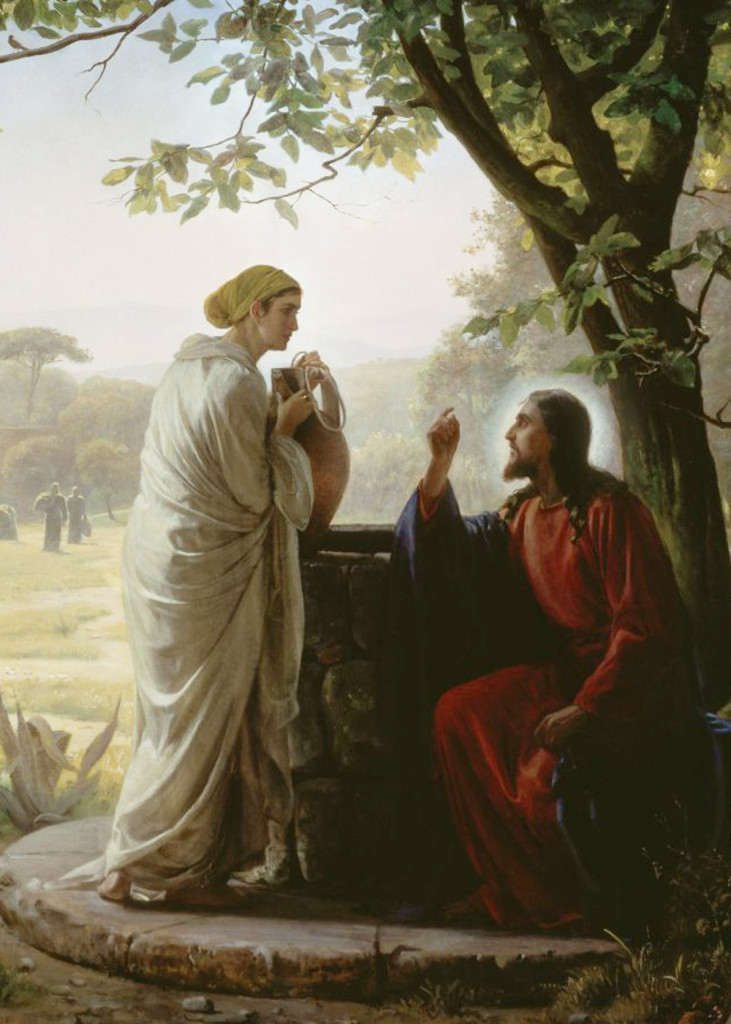 I imagine the woman who anointed Jesus’ head with nard would have been in the throng of women watching. She was the one who had recognized him as a prophet, by performing a traditional anointing ceremony in the company of his dinner guests. Was she horrified now that Jesus’ prophetic role had been misunderstood as a threat to Caesar? Was she wondering how his message could have gotten so mixed up? That God’s reign and power is not coming in the future, but is already here inside each of us.

The woman that Jesus met at the well in Samaria, did she follow him to Jerusalem too? Was she among the women standing at Golgotha? What would have been going through her mind? I imagine that she was remembering meeting Jesus at the well and being totally taken by surprise that he would acknowledge her, let alone talk to her. Not only was she an unfamiliar woman, but also a Samaritan, segregated and off-limits. Yet they exchanged words and water. Jesus acknowledged her dignity and worth, even when his disciples thought he was crazy for doing so. And since then, she had not thirsted. Standing there, was she frightened and confused, wondering how this madness and violence could have come about?

We know that Mary Magdalene was there, Jesus’ devoted follower. How her heart must have been breaking, hearing Jesus crying out, despairing, pleading with God. Why had God had forsaken him? She must have wondered if God had forsaken all of them. Did she remember meeting Jesus in Galilee, when he reached out to her and healed her soul? Did she recall feeling Jesus’ power to heal, to love, to bring peace? At that moment, her own spirit must have been emboldened to step forward and help Joseph take Jesus’ body down. To wrap his body in linen. To lay it in the tomb. To prepare the oils and return at dawn to anoint his body for burial. 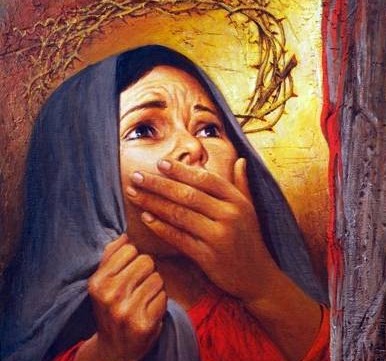 As a mother myself, the most difficult for me to contemplate is Mary, Jesus’ mother. What must it have been like for her to see her child suffering this wickedly cruel death? Was she remembering how she had tried to be a good mother and keep him safe? How he had been lost in Jerusalem as a young boy, and how scared she was that he had been snatched away? Was she thinking about Simeon’s prophecy that her soul would be pierced by a sword one day? Was she agonizing over her helplessness, wanting to change places with her son, to die in his stead? Was she grieving as only a mother can grieve who survives her child?

This Easter, let’s remember the women in the life of Jesus, let’s reimagine their faith as they stood and watched Jesus die. I invite you to set aside an hour to remember them on Holy Saturday, the most solemn day in the Christian calendar when the altars of churches are stripped and mass is performed only for the dying. I think that it is appropriate for the silenced stories of the biblical women to fill this vacancy on Holy Saturday, that it might become a traditional time for Christians everywhere to remember the women as the followers of Jesus who remained steadfast and faithful as Jesus died and was buried.

April D. DeConick is Isla Carroll and Percy E. Turner Professor of Biblical Studies at Rice University and author of ‘Holy Misogyny: Why the Sex and Gender Conflicts in the Early Church Still Matter.’ She authors a blog, The Forbidden Gospels. DeConick, along with Betty Adam, has written ‘Easter in Memory of Her,’ a one-hour production by the nonprofit organization Brigid’s Place. Members of the Houston Chamber Choir Singers and harpist Becky Baxter will perform the musical, with original score by Sonja Bruzauskas, at Houston’s Christ Church Cathedral, 1117 Texas Ave., from 4 to 5 p.m. April 11th, Holy Saturday.